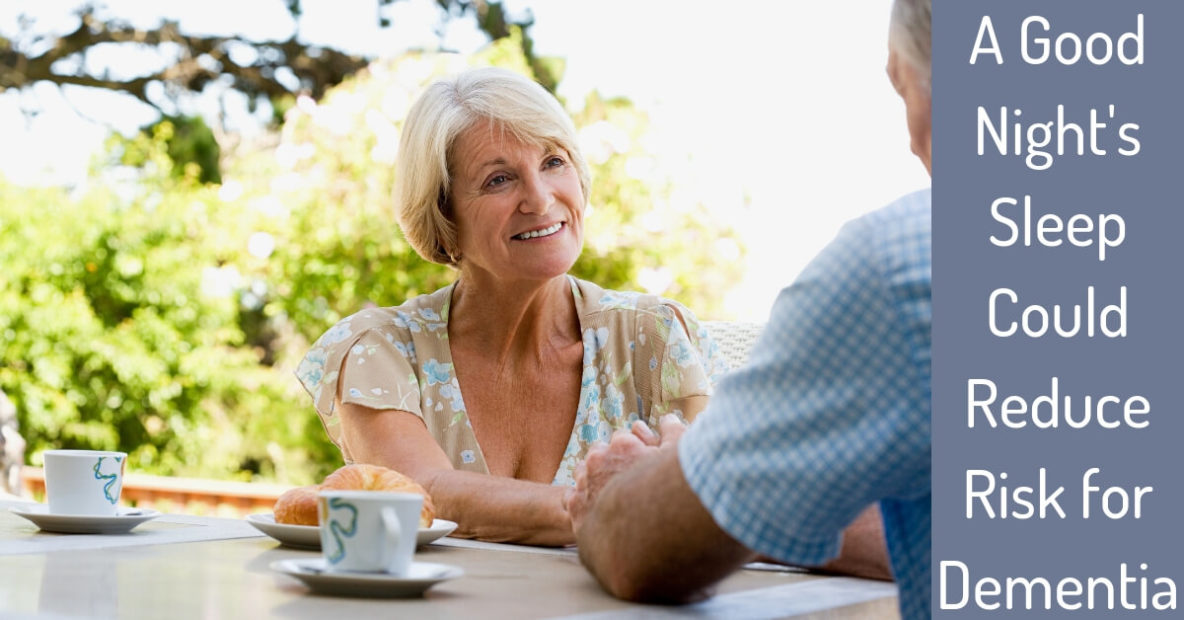 Have you been struggling to get a good night’s sleep, or feel like you wake up a hundred times in the night? Not only does a poor sleep make you feel groggy, irritable, and have trouble focusing, but a new study shows that if you’ve been sleeping poorly you may be increasing your risk of developing dementia.

A recent study in Japan followed more than 1,500 adults over a 10-year period to see how sleep impacted their overall health and wellbeing. In this study, published in the Journal of the American Geriatrics Society, researchers discovered that those who slept less than 5 hours per night were more likely to suffer dementia or premature death than those who slept a normal amount.

Another study focusing on brain wave activity scanned participants brains, both after a normal night’s sleep, and after a night of sleep deprivation. They found that those who didn’t sleep had a 5% increase in beta-amyloids in certain regions of the brain! Beta-amyloids are one of the amino acids that cause a build of plaques and tangles in the brain. These plaques and tangles are proteins that form throughout the brain, slowing communication between brain cells, as well as causing cell degradation and death. They’re also the cause of dementia and Alzheimer’s disease, so finding such a big increase in these amino acids after a sleepless night links poor sleep with a higher risk of dementia. Not only that, but researchers found the highest increases in beta-amyloids in the thalamus and hippocampus, regions of the brain that are most affected during the early stages of dementia.

Another connection between sleep and dementia has to do with memory. Neuroscientists at the University of California, Berkeley, looked for links between sleep and memory, and tested people’s memory of word pairs before and after sleeping, as well as measuring brainwave activity during the night. They found that memory and recall was much worse among older adults, and these older adults had much less slow-wave activity during sleep. What was interesting about this study is that the scientists found that sleep improved memory retention for the younger group, and sleeping deeply allows the brain to create and store long term memories. Meanwhile, the older adults didn’t sleep as well, and struggled to convert memories into long term memories, but used their hippocampus to recall the word pairs, a structure linked to short-term memory.

“When we are young, we have deep sleep that helps the brain store and retain new facts and information,” says Dr. Matthew Walker, lead researcher. “But as we get older, the quality of our sleep deteriorates and prevents those memories from being saved by the brain at night.” This study shows how sleep is crucial to maintaining health, forming new memories, and preventing dementia.

The Outcome of a Sleepless Night

Many negative outcomes accompany a sleepless night. People who struggle to fall asleep, or don’t sleep for enough hours have trouble focusing, concentrating on tasks, or getting through the day. They’re more prone to accidents, feel drowsy, and risk falling asleep behind the wheel. If you’ve struggled with sleeplessness, or wake often throughout the night, you’re likely to be in a worse mood during the day, be more irritable, or struggle to remain calm

Dementia and Alzheimer’s Disease are among the leading causes of death among seniors in America. There is no cure for dementia, but there are steps you can take to prevent the disease, or slow its progress. Eating well, exercising, and maintaining your overall health are important. Exercising the brain is another way of preventing dementia. Pick up a new hobby, learn a new skill, or take language classes. You’ll be strengthening your brain, which could help reduce your risk of dementia.

Sleep Reduces the Risk of Dementia

Getting a good night’s sleep is important for overall health, as well as for regulating energy levels, mood, and quality of life. Sleeping also reduces your risk of dementia, while lying awake at night has harmful effects on the brain and your memory, and can lead to dementia.

If you’ve been struggling to sleep or believe you may experience sleep apnea, visit us at Sound Sleep Medical and find out what you can do to get a good night’s rest.