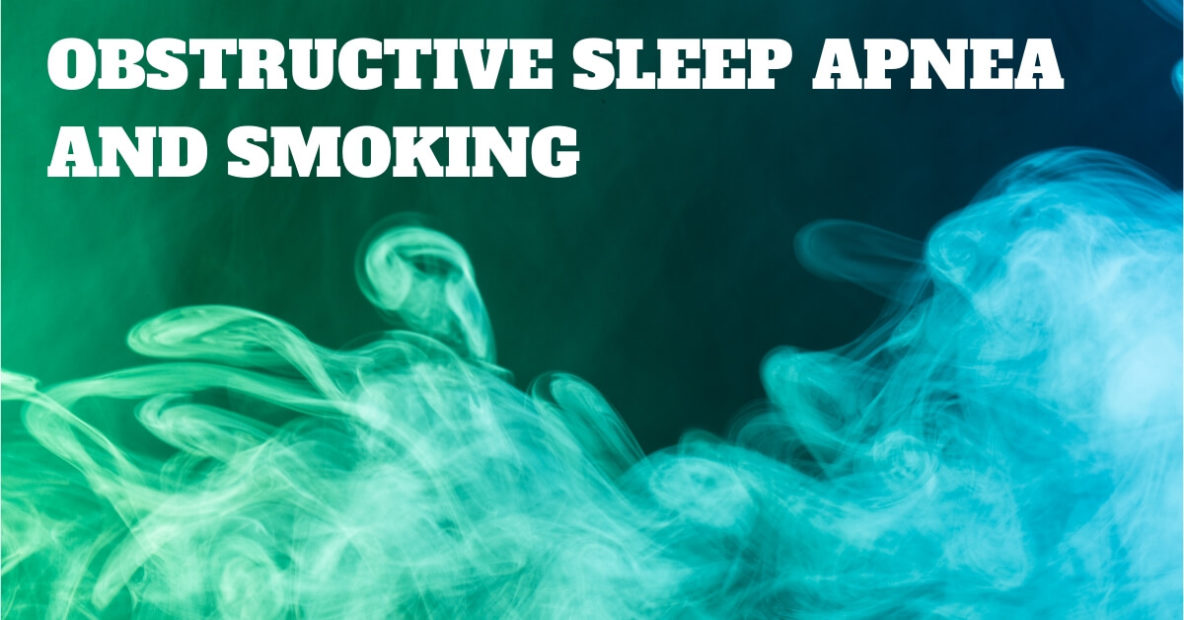 Everyone knows smoking is bad for your health, and if you’re a smoker you’ve probably thought about quitting. Smoking increases your risk of cardiovascular disease, stroke, and lung cancer. Did you know that smoking has also been linked to obstructive sleep apnea? If you’re a smoker, be it cigarettes, cigars, or pipes, you might be impacting your sleep. If you’re struggling to get a good night’s sleep, it’s time to reconsider giving up the cigarettes.

Have you been struggling to sleep at night? Does your partner complain that you often snore, or that you seem to stop breathing in your sleep? Sleep apnea is more common than you might think, and it’s estimate that over 20 million Americans have this sleep disorder. If you have obstructive sleep apnea, you’re more likely to feel daytime drowsiness, have difficulty waking up in the morning, struggle to concentrate on tasks, and have an increased risk of workplace or traffic accidents. Sleep apnea is also closely linked to other conditions such as cardiovascular disease, hypertension, depression, and even dementia.

Obstructive sleep apnea occurs when the muscles in your throat and face relax during sleep. When these muscles relax too much, they block the airway, and cut off air circulation. After a few seconds your brain realizes the flow of oxygen has stopped, and sends signals to wake you up, tightening the muscles and allowing you to breathe. While you might wake up gasping for air, it’s more likely that you’ll wake up for one or two seconds without realizing it, and those with sleep apnea can wake up hundreds of times in one night. This means you won’t be sleeping deeply, or getting enough REM sleep to rest and recharge.

Vidya Krishnan, MD, MHS, and a team of researchers recently published an article in Chest, looking at the links between smoking and obstructive sleep apnea. They found that the two are often comorbid conditions, meaning that those who smoke often struggle with snoring and sleep apnea, and have difficulty sleeping.

Cigarette smoking increases the severity of sleep apnea, and worsens the symptoms of the disorder. One way that smoking can affect sleep is through sleep fragmentation. Smokers report more difficulties falling asleep, trouble staying asleep, poor sleep quality, more nightmares, and periods of wakefulness during the night. They also reported more daytime sleepiness. Smoking can also inhibit sleep and lead to sleep apnea through upper airway inflammation. Tobacco smoke has been shown to cause some airway inflammation, affecting the tissues of the nose, causing swelling and narrowing the airways, and making it more likely that your upper airway will collapse during sleep, and block your airways. You’re more likely to have a stuffy nose, feel congested, and experience turbulent airflow during the day and snoring at night.

A recent study of over 800 adults found that those who smoked were 2.3 times more likely to snore! The more you smoke the more you snore, so if you smoke 2 packs a day, you’re more likely to snore than someone who has 2 cigarettes in a day. Snoring is often a sign of deeper problems, and if your partner has been complaining about your snoring, you’re likely experiencing blocked airways, difficulty sleeping, or even obstructive sleep apnea. Not only that, but studies have shown that for every cigarette you smoke in a day, you’ll shorten your sleep by around 1.2 minutes. Nicotine can be a powerful stimulant and keep you from getting the sleep you need.

If you’ve been trying to quit smoking, this is just one more reason to stop smoking. Don’t let smoking exacerbate your sleep apnea, or lead to poor quality of life. Quit smoking and reduce your risk of heart disease and cancer, increase your lifespan, and get back to sleeping deeply at night.

Want to get back to quality sleep? Visit us today at Sound Sleep Medical and find out how you can get a good night’s sleep every night. We’ll analyze your sleep patterns, look for the signs of obstructive sleep apnea, and give you tips on how to rest well at night. From sleep hygiene to sleeping positions, or even treatment for sleep apnea, we’ll work with you to make sure you can sleep soundly every night.