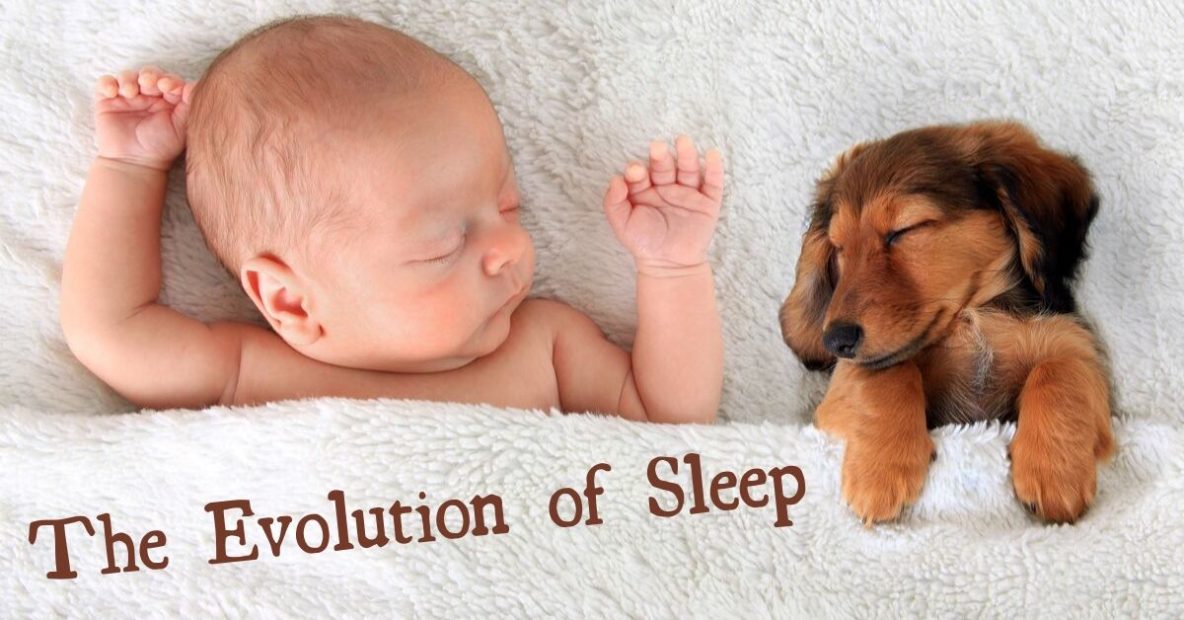 Have you ever wondered why we sleep? We all have such busy lives, and it’s easy to think we’d be happier if we could sleep less. Why did humans evolve to need 7 to 9 hours of sleep per night, and what purpose does sleep have in our modern lives?

The Disadvantages of Sleep

At first blush, sleep doesn’t seem to have an evolutionary advantage. In fact, it could be very detrimental! All the hours our early ancestors spent sleeping were hours they couldn’t eat, procreate or keep themselves safe from predators. With all these disadvantages, why didn’t we evolve to need less sleep? There must be some huge advantage to sleep to make up for these disadvantages.

The Necessity of Sleep

All animals have evolved different sleep patterns and sleep cycles. While humans sleep an average of 8 hours during the night, other animals like bats sleep through the day. Polar bears are awake for long hours during the summer months, but hibernate for many months during the freezing temperatures and darkness of winter. During migration season, whales hardly sleep at all, and some sea animals, such as the dolphin, have unhemispheric sleep, where one half of their brain sleeps while the other is awake, watching for predators, and rising to the surface to breathe.

There are numerous theories as to why we sleep the way we do, and sleep serves a lot of functions. It allows the brain to repair itself and prevents any harmful buildups of cells in the brain that could lead to degenerative diseases such as dementia. Sleep allows the brain to make new neural connections and consolidate memories, and allows you to function well during the day.

From an evolutionary perspective, the wide variety of sleeping patterns could point to a period of adaptive inactivity that protects animals and humans during times they’d be most vulnerable to predators. Take bats as an example. They can collect enough food during a few hours in the night, when many predators are asleep. If they were to fly around during the day, not only would they need more food to provide more energy, they’d be at risk from large birds of prey that are only active during the day. Human sleep likely evolved in the same way. While we can see clearly during the day, our night-time vision isn’t so sharp, and if our ancestors were out foraging in the night time they’d be easy prey to large predators. Staying safe inside a cave or up a tree and sleeping through the night would have kept them safe through adaptive inactivity.

A recent study published by researchers at Duke University found that humans actually have the most efficient sleep when compared to our closest animal relatives, the primates. Many of the monkeys in our family tree, like baboons, orangutans, and chimpanzees, sleep far more than we do. The average sleep of many of our primate cousins is 14 to 17 hours per day. How do we manage to sleep less? Our sleep is more efficient, and we spend less time in the light stages of sleep, and more time in REM sleep. In fact, the average person spends 25% or their sleep in REM, while primates such as lemurs only spend 5% of their overall sleep in REM. “Humans are unique in having shorter, higher quality sleep,” explained anthropologist David Samson from Duke University, who spent almost 2,000 hours watching orangutans in REM and non-REM sleep to study their sleep patterns.

How did we evolve efficient sleep? Researchers believe that when humans started living in larger settlements on the ground rather than small groups up in trees, they were safer from dangers, and able to get the most out of their sleep without needing to keep an eye out for predators. Shorter sleep meant that our ancestors had more time available for learning new skills, creating societies, and boosting brainpower.

Want to have efficient sleep, and wake up feeling refreshed and ready to tackle a new day after just 7 to 9 hours of sleep? Visit us at Sound Sleep Medical to find out what’s keeping you from getting the rest you deserve.