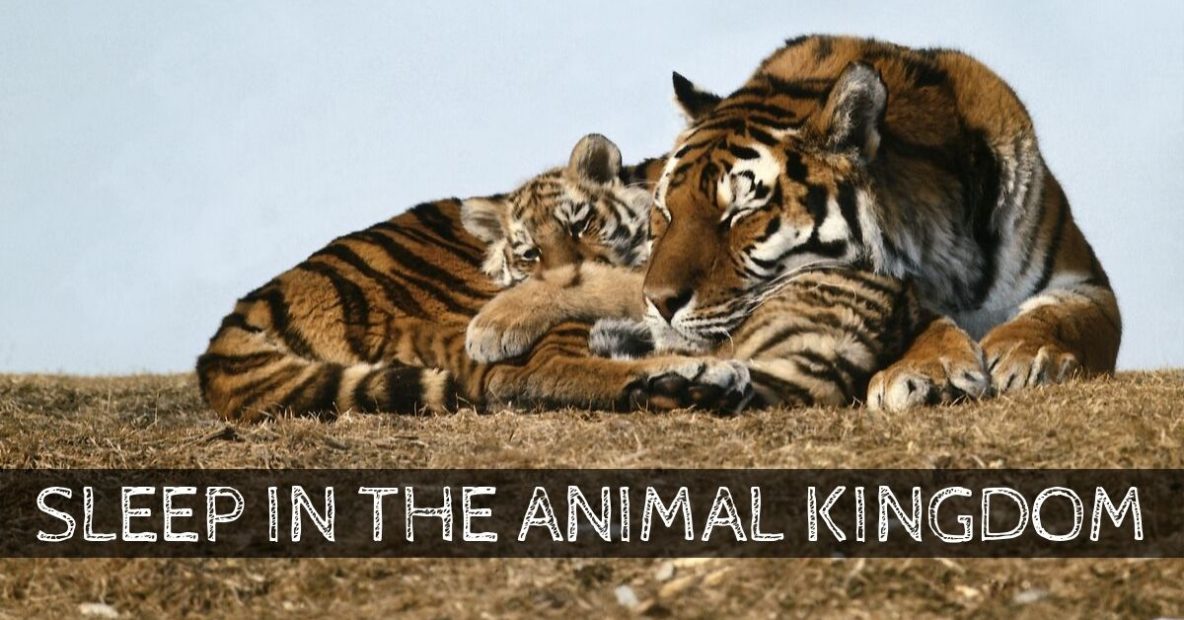 Have you ever wondered how many hours animals spend sleeping? Do they nap during the day so they can prowl around at night? Do they follow sleep routines and brush their teeth before bed, and just how important is sleep for animals?

Do All Animals Sleep?

There are millions of species of animals in the world and in the sea, and we really don’t know that much about their sleep. Do fish sleep while they’re swimming? Do cows sleep standing up, and do bats get a good day’s rest hanging upside down in a dark, damp cave? Some mammals sleep in very similar ways to humans, and others have completely different sleep patterns. For example, insects and fish don’t go through a REM cycle when they sleep, while for birds, mammals, and humans, this is the most important sleep cycle. Despite all the ways that animals sleep, one thing is for sure. All animals need rest, and sleep is the only way to rest and recharge the brain.

How Long do Animals Sleep?

The length of sleep each animal needs is just as diverse at the millions of species on our planet, and while humans need 7 to 9 hours each and every night, the ideal length of sleep varies widely between animals.

One of the sleepiest animals is the lion, who spends 18 to 20 hours a day dozing away in the shade.

Sea otters sleep 10 or 11 hours per night, while most whales only sleep for 2 hours out of every 24.

The animal that sleeps the least is the giraffe, and they can enjoy their day with only 30 minutes of sleep!

Bullfrogs, on the other hand, can survive without sleep for months. They do close their eyes and get some rest from time to time, but during these moments they’re still very alert, and can quickly respond to any threats in their environment. Even though they hardly sleep all summer, they go into a deep sleep for many months, hibernating through the freezing winters, and making up for all the sleep they lost in the summer months.

Do Animals Have Beds?

We humans are obsessed with our beds, and need a soft mattress and a cozy blanket to get a good night’s sleep. Do animals have beds too? Many animals do have preferred sleeping spots, and many dig into some soft dirt, or find a sheltered cave to call home. Birds have nests, and orangutans make comfy beds out of leaves and twigs to help them sleep better. Otters don’t have beds, but they don’t want to float away from their territory, so as they float on their backs in sleep, they hold paws, or grasp some kelp to keep them grounded. Dolphins are water mammals that require a lot of sleep, and they’ve evolved a clever way to catch enough zzz’s. They have unhemispheric, or one-sided sleep. This means that while one hemisphere of the brain is sound asleep, the other is wide awake, watching for predators, and making sure they come up to the surface to breathe.

While we do know a few interesting facts about animal sleep based on observations, it’s hard to study sleep in animals. When it comes to human sleep, it’s easy for researchers to monitor brain activity, or find out how many hours of REM sleep we need to get a good night’s rest. Scientists can ask participants how they slept and how they feel, and collect self-reported data to understand sleep. The mystery of animal sleep makes it intriguing to researchers, and new methods of collecting data on animal sleep have made it easier to find answers to the questions we’re the most curious about.

While we don’t know that much about sleep in the animal kingdom, at Sound Sleep Medical we know all the latest research about your sleep needs. We’re here to help you sleep, and whether you need a new mattress, should make some changes to your sleep routines and sleep hygiene, or need to treat a sleep disorder such as sleep apnea, we’ll make sure you get a great night’s sleep every night. Visit us today and start sleeping better.