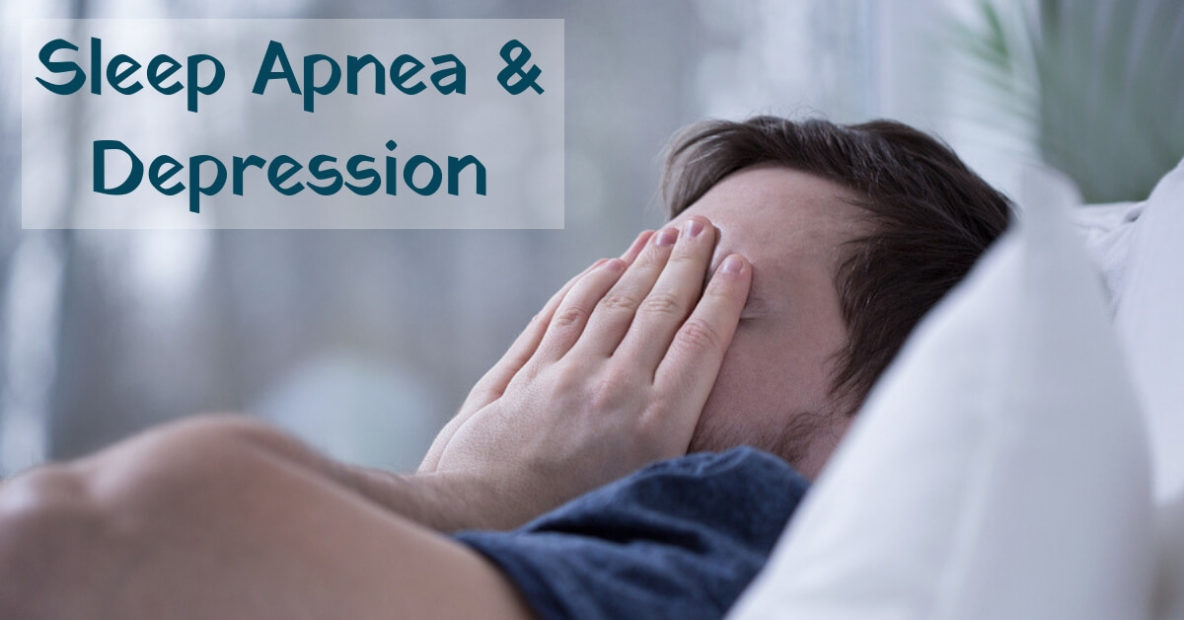 Sleep Apnea only affects sleep, right? While it is true that sleep apnea affects your ability to sleep at night, it’s been linked to a lot of negative health effects. Those with sleep apnea are more at risk of heart disease, diabetes, and a weakened immune system, just to name a few. Recent studies show that sleep apnea is also linked to depression.

Sleep apnea is a sleep disorder that prevents you from getting a good night’s rest. If you have sleep apnea, you’ll actually stop breathing many times while you’re asleep. This happens night after night, and you’re unable to experience normal sleep cycles. Sleep apnea is far more common than you may think, and it’s estimated that roughly 18 million Americans have sleep apnea.

If you’ve been having difficulty sleeping, and think you might have sleep apnea, there are a few key symptoms to watch out for. The first to appear are loud snores, fatigue, morning headaches, or waking up with a dry mouth. You might realize you have sleep apnea when you discover you’ve stopped breathing while sleeping. This can wake you up in the middle of the night feeling short of breath, or might be noticed by the person sharing your bed. You’ll also start to recognize some of the other symptoms of sleep apnea, such as excessive tiredness, insomnia, trouble paying attention or focusing, and increased irritability.

Like sleep apnea, depression is very common among Americans, and researchers think around 15 million Americans deal with depression each year. These two conditions are clearly related, and it’s not hard to understand how lack of sleep can affect your mood, or cause anxiety and depression. You might experience the start of both sleep apnea and depression at the same time, or the sleep deprivation may start some weeks or months before your mood is affected. One recent study discovered that 46% of those with obstructive sleep apnea also experienced depression!

It can be hard for someone with sleep apnea to realize they’re also dealing with depression, since many of the symptoms overlap. Those with depression also struggle with irritability, frustration, insomnia, difficulty concentrating, and increased fatigue. The difference with depression is that you will have a lot of feelings of sadness, loneliness, or hopelessness.

If you think you might have sleep apnea, depression, or both, the first thing to do is find out if you have sleep apnea. Visit us at Sound Sleep Medical for a sleep test, and we’ll help you get a clearer picture of your sleep patterns and your health. If you’re diagnosed with sleep apnea, treating your sleep disorder is the key to treating depression, and will let you get back to enjoying a full life with your loved ones.

If you have sleep apnea, there are a few things you can do to manage your sleep disorder, and take control of your health. Exercising regularly can help you manage sleep apnea, as it will keep your weight stable, and has been shown to alleviate depressive symptoms. Drink alcohol only in moderation, or avoid alcohol all together; it’s been shown to make both sleep apnea and depression worse. Pick your sleeping position carefully, and don’t sleep on your back. Sleeping on your side or stomach will help keep your airway open, and reduce the number of times you wake up in the night. Finally, don’t give in to the temptation to take sleeping pills. You might hope they’ll help you get a good night’s sleep, but they don’t have any affect on sleep apnea, and can’t keep your airway open during the night.

One of the best ways to manage sleep apnea and treat the related depression is by using a Continuous Positive Airway Pressure (CPAP) machine while you sleep. This machine keeps a steady flow of oxygen passing though your lungs during the night, so you’ll finally have the sound sleep you need to feel well rested, be able to focus on tasks, and be free from the weight of depression.

Start your journey to sleeping well at Sound Sleep Medical, where our team is here to help you every step of the way.