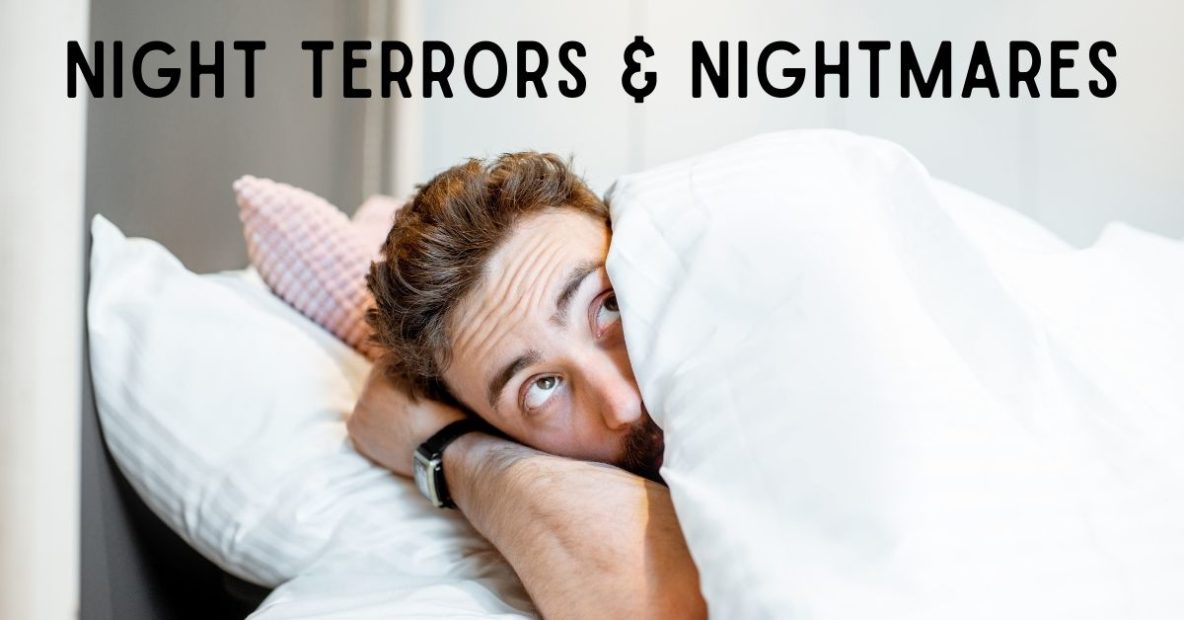 We all have dreams during sleep, even if we don’t remember them in the morning. Some dreams can be peaceful, while others are exciting or just bizarre. Sometimes dreams can take a darker turn. Have you been having night terrors or nightmares? Here’s everything you ever wanted to know about nightmares.

What is a Nightmare?

A nightmare is a scary dream that can be very intense and threatening. Nightmares, just like pleasant dreams, happen during REM or rapid eye movement sleep. You spend more time in REM sleep in the second half of the night, so that’s why nightmares are more common towards morning.

When you wake up from a nightmare you may experience racing thoughts and feel very upset or anxious. You will have some of the physical symptoms of a night terror that can include an elevated heart rate or profuse sweating.

Sleep specialists define nightmares as disruptive dreams that cause you to wake up. A bad dream, on the other hand, can be very unpleasant but doesn’t make you wake up in the night. It’s normal to have a nightmare from time to time. However, if you have nightmares almost every night you’ll have a hard time getting enough sleep. These nightmares can keep you from sleeping soundly, and cause you to feel fatigued during the day.

Why Do We Have Nightmares?

No one knows exactly why we have nightmares or night terrors. One of the most common explanations is that dreams are the way our mind processes emotions, as well as consolidating memories from the previous day. Nightmares may be the way we process emotions like fear, sadness, anxiety, and trauma.

Nightmares can have a number of causes. These will be different for everyone. Some of the common causes of nightmares and night terrors include:

While nightmares and sleep terrors both cause distress, they are slightly different. The main difference is that nightmares usually happen during REM sleep and will cause us to wake up with a start. Night terrors, on the other hand, usually happen during non-REM sleep, and we may not wake up from a night terror. If you’ve had a nightmare, you will probably remember it very clearly the next morning. If you’ve had a night terror, you may not have any memory of it in the morning.

Everyone has occasional nightmares. This can cause one night of bad sleep, but you’ll catch up on sleep the following night. However, if you experience frequent nightmares you may have a nightmare disorder.

A nightmare disorder can cause serious disruptions in sleep and lead to daytime fatigue. When you have recurring nightmares, you’ll also notice changes in mood and behavior during the day. Nightmare disorders are more common among children, and some kids will have nightmares every night. Most children will stop having nightmares as they get older.

When you experience recurring nightmares or night terrors, you’ll notice a decrease in the quality of your sleep. When you wake up from a nightmare in the middle of the night, it can be hard to calm your racing thoughts and soothe your anxiety. It takes a long time to get back to sleep, and you may not get enough sleep. Frequent nightmares can also make you anxious when going to bed, and impact the quality of your sleep.

To sleep better, it’s important to find out what’s causing the nightmares, and address this source of stress. Next, work on improving your sleep hygiene by keeping a consistent sleep schedule, taking time to relax and destress in the evening, and avoiding drinking caffeinated drinks before bed. For more tips on how to manage nightmares and night terrors, visit us at Sound Sleep Medical.